Dan at his best 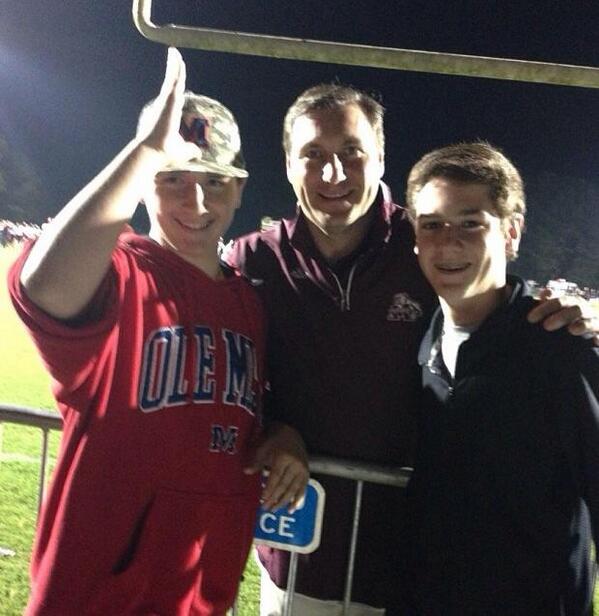 i guess I am just surprised that both sides are constantly obsessed with each other. Even when their side is winning. Just doesn't make sense. All part of the rivalry, I guess.
G

Actually, I give Mullen credit. I mean he sees the kid is wearing an OM shirt and still poses for the Photo. Didn't have to.

And those who know me KNOW I'm no Mullen "fan". But credit where credit is due.

Originally posted by RobbieFaulk:
i guess I am just surprised that both sides are constantly obsessed with each other. Even when their side is winning. Just doesn't make sense. All part of the rivalry, I guess.
Click to expand...

Robbie, I know you're new. But it will all become crystal clear Thanksgiving night. Trust me. Prepare yourself for an "Oh My God" moment when you attend your first Egg Bowl. You'll never see it the same way again.....

This year's egg bowl will be a war, OM looks really good right now, seems like a great rivalry though and those games are always pickems.
R

GoRebs, I'm new to journalism. Not the Egg Bowl. I grew up a State guy so I've been to the Egg Bowl since I was 3 years old. It's just now that I have to take an unbiased approach and I look at things from a different perspective, it's a little silly if your team is succeeding. I've always wondered why each teams' fan base cares more about the other though, even when I was a fan.
T

If you all think that's bad you should check out FGF and the Bad Apple (South Carolina and Clemson) some get down right nasty.
G

I agree. I'm an older OM fan (57) and have seen many Egg Bowls as well. Back then, it was a rivalry, but not "ugly" like it has become these days.

I had and still have many close friends that attended MSU. When we were younger, we had fun with the game. For example, at work, if MSU won, I had to carry a cowbell everywhere I went that day. Meetings, lunch, even the Men's room. Good stuff and good memories. If OM won, they had to carry the Rebel Flag all day. I guess the "Flag" dates me as well.

Bottom line. I care about OM. I really don't notice MSU until Egg Bowl week. I suggest others do the same. And make it "fun" again, not hateful. It's gotten so bad I don't go to Starkville anymore. And I know some MSU fans that avoid Oxford for the same reason.

Thanks, yes. It's always special to beat our biggest rival. I hope State doesn't beat theirs this year.
D

Here we go!
Its hilarious, to try to feel superior ole miss fans will claim LSU is their biggest rival and run their mouths about how or biggest rival is ole miss blah blah blah.
Come to think of it, we don't care if we win or lose to ole miss. We really just care about beating Bama, they are really our biggest rival****
Posted from Rivals Mobile
R

In DC's defense, he was clearly being sarcastic.
R

I think CDM is like anyone else and can laugh at himself, but I saw a different side of Dan today. I had always heard rumors that he had a temper, but I saw it today. I think he is really starting to feel some heat. He will get another year, but does he survive a 6-6 year next year when OM is winning 9-10?
R

He's got some leeway this year. If he were to go 6-6 next year it would be hard to imagine him getting another chance. With that said, I think State should have a much better season. Favorable schedule and an older, more experienced group. That's IF they improve things in the offseason and the rest of this year.
T

Problem is you are penciling in UK as an auto-win when they will improve and be playing at home. You dont know what you are going to get from Vandy next year. those will not be auto-wins. Yeah A&M will not be as tough but I have not see State improving that much.
D